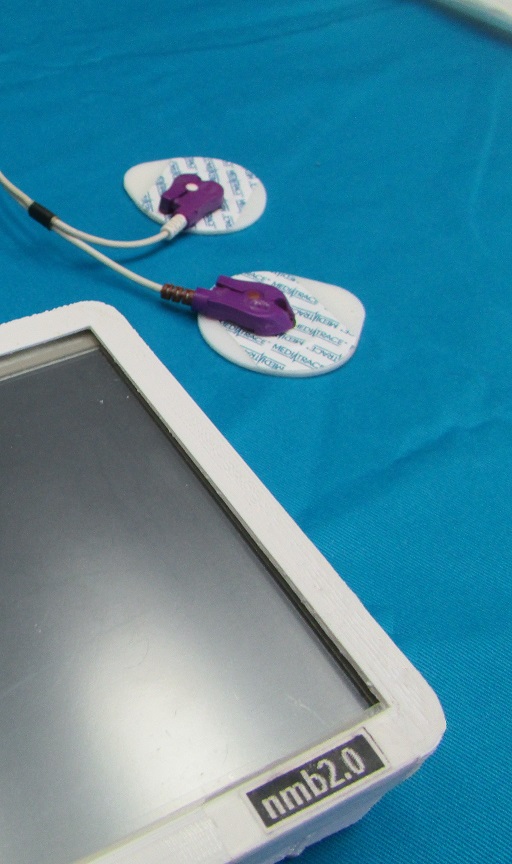 Patient muscle relaxation makes abdominal surgeries easier and laparascopic surgeries possible, and allows patient breathing while the patient is on a ventilator in the OR and assists patient recovery in the ICU. In these situations NMBs prevent patient movement, permit deep surgeries through small incisions with minimal complications, and reduce energy expenditure and work for patients with weak hearts.

Because they are worried about other important vital signs, anesthesiologists may administer NMBs less perfectly than if they had nothing else to monitor, and less-perfect administration can lead to injury and delay. (More)

Alternatively, administration may be done in an overdosing fashion. With surgical conditions changing or with the patient not responding to the drug as expected, the patient may get too much and be unable to breath at the end of the case.

These styles of administration create risk of intra-operative injury, surgical error and delay, cancelled or delayed cases following due to an inability to leave the OR, and breathing problems, injury and need for additional interventions in recovery.

We're developing a novel system that measures and adapts to the patient's response to NMBs to assist physicians and help reduce these costs. This system advises the anesthesiologist on the timing and dose of NMB drugs based on modelling of the drug in the patient and the history of the measured patient responses.

A 60-patient prospective, randomized, controlled, clinical trial was run to test the system (known as "NMBAS", for Neuromuscular Blockade Advisory System, in the journals below). There were two groups of 30 patients, one group was treated by standard care and the other had treatment with diarobo's NMBAS system.

As well, total administered doses of rocuronium (the paralysis agent used in this study), reversal drugs and other drugs, and the incidence of postoperative adverse events were not different for the two groups. 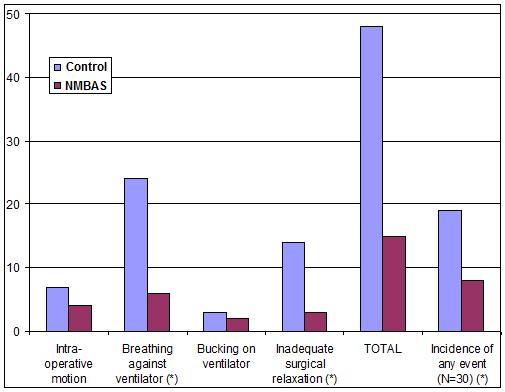 Figure 1: Adverse event results from the clinical trial: a comparison of adverse events presented separately (columns 1 to 4), in sum (column 5), and as an incidence per case for the Control (left columns) and NMBAS (columns on the right) groups. The asterisk (*) indicates statistical significance at p < 0.05.

The incidence in total intra-operative events associated with inadequate NMB was significantly lower for the NMBAS group.

Incidence of breathing against the ventilator and inadequate surgical relaxation were reduced with statistical significance in the NMB treatment group. There was also a trend towards reduced intra-operative motion and bucking on the ventilator, but the difference was not statistically significant.

The incidence in total intra-operative events associated with inadequate NMB was significantly lower in the NMBAS group compared to standard care (8/30 vs 19/30; P = 0.004). 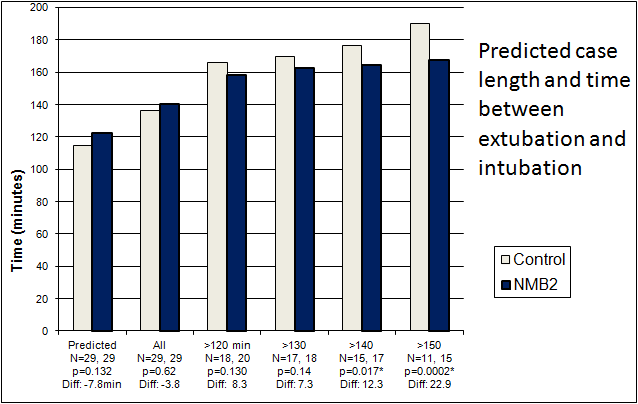 NMBAS treatment group cases took less time from patient entry to the room until extubation, despite having a trend towards longer predicted case lengths (not statistically significant however as p=0.132). Time to extubation for the NMBAS treatment group decreased increasingly as cases became longer, with cases of 150 minutes or longer being statistically significantly shorter by approximately 23 minutes.

A comparison of the two groups by procedure length is shown in Figure 2. 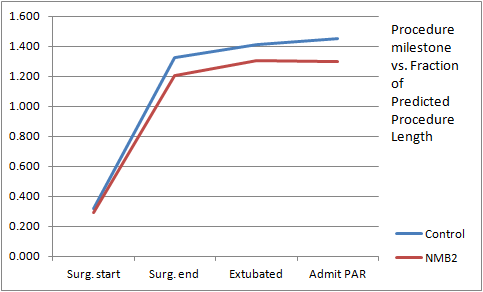 Figure 3: Timing results from the clinical trial: a comparison of the two groups for time to case milestone by proportion of the predicted case length.

Details of the clinical trials have been published and can be found in brief, here:
(Pubmed abstract)

and in the peer-reviewed journal Anesthesia and Analgesia, here:
Anesth Analg 2008 107 p1609

Applications are being pursued as continuations and/or divisionals of the above in the United States and in other countries.

The initial applications are: